I should have said this last time...

I mentioned that I'm doing the National Novel Writing Month thing for the first time this year. What I didn't mention was what I was writing. I'll be working on a sequal to "A New Threat", titled: "Threat From The Past".

We'll see some recuring characters, as well as learn more about the Guardian's past...
Posted by Unknown at 6:31 PM No comments:

A Novel in a Month??

This should be interesting, as I usually only write when I get free time between work and family, my usual writing time for a first draft is around four years. (Well, it was four for the first one, and it's been about ten months for An Uwanted Apprentice at 34,000 words so far...)

I'll post my progress here in November, and we'll see how I do! I'll also post excerpts, that should be interesting....
Posted by Unknown at 9:20 PM 1 comment:

Why you need reviewers

I've read my draft of "A New Threat" at least six or seven times. Every time, I spot a minor typo. Until, one day when I thought I'd found them all.

Then I had someone who hadn't read the story before, and hadn't heard any of my thoughts as I was writing read it. And of course, more typo's were found.

In one of the climatic scenes near the end, the bad guy gets caught. Something bugged me about this, but I couldn't figure out what. Everything was in there, it made sense, and yet...
I had a few people read it, and they all liked it, then the above mentioned reader read it, and pointed out something. What I read what was pointed out, I said "THAT'S IT!" (Just like Charlie Brown in "A Charlie Brown Christmas"....)

Looking at it now, the problem was obvious... I'll post the old version of the scene, and the new version once I get down re-writing it.
Posted by Unknown at 6:25 PM 1 comment:

I got my first piece of fan-art! Bast: 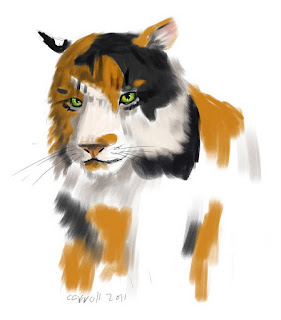 Posted by Unknown at 9:48 PM No comments:

10 Tips To Help Your Writer Friends

Do you have a friend who's a writer? Do you want to encourage them, but don't know how? Here's ten things you can do to help:

1. Read their work.
This one seems obvious, right? Writers love to have people read their work and give their perspective on it. Most of the time though, people read something, and the writer gets comments like "I love it!" That is helpful, somewhere deep down, every writer worries that what they've written is crap, and it's nice to know that at least someone else likes it. What a writer is really looking for though, is why you like it, or why you didn't. Do the characters sound real? What do you like about them? Does the plot seem feasible? Does something feel "off" about it, even if you aren't sure what? That sort of thing.

2. Give them time to write.
For best results, just like anything else, writers need to write at least a little everyday. Sometimes, it's hard to squeeze the time in. Writing time also needs to be distraction-free. It's hard to explain this, but when you get in the zone, and the muse is good to you, the story just flows. This doesn't happen often. Most of the time, writing is hard work, each word has to be carefully pulled and considered. The worst thing you can do to your writer friend is to interrupt them when they are in this writing trance. Once interrupted, it's almost impossible to get it back. It's worse when your writer friend is trying to edit. He's trying to keep whole chapters in his head to see if he dropped a plot-line somewhere, and then the train is derailed and all he can think about is the grocery bill you just asked about. Now he has to start over from square one and re-load that whole chapter, and try to find the one word he was worried about among the 100,000 or so other words in the book.

3. Remind them to write.
This one goes hand-in-hand with number 2. Writers love to write, but sometimes it can be hard, the words just won't come. Dealing with that is a whole other post, but basically we just need to work though it. Encourage your writer friends to write. Ask what happens next, comment on what you think the characters would do. Writers love it when they've done a good enough job to get people wrapped up in their imaginary world. Keep reminding them to work on it... polietly!

4. Help them avoid distractions.
This again goes along with 2 and 3. Writers these days just about have to blog and maintain a facebook page, and half a dozen other activities to let other people know they exist, and that they might want to read this book.... but that's only helpful if the writer remembers to write the book too.

5. Recommend their book.
If your writer friend has a book published, recommend it to your friends.... as long as you think they'd like it. I've seen posts on the net from agents and book reviewers both that primarily deal with just one or two genres, and they apparently get asked to review books outside of those categories all the time.

6. Be Honest...
Even if your writer friend is a family member, be honest with them. Don't be afraid to tell them if you don't like something, or if you just don't think a concept will work. Don't worry about sparing their feelings, if they're trying to get published, agents and editors will be much more critical that you'll ever be.  If the bad is never pointed out to a writer, they can't get better...

7. ...but be nice while being honest.
Honest feedback is very necessary, but remember to include what you liked along with what you didn't, or put in possible suggestions to how to fix what you think might be wrong.
When a writer writes, he often bares his soul in the writing, don't rip it out.

8. Take your writer somewhere.
If your writer friend is stuck, take him somewhere, like a walk in the park, to the local mall, anywhere that might inspire creativity. Places with people to watch are good; watching people can help if a writer is struggling to get a character's mannerisms just right. Places with inspiring scenery are good too.

9. Make sure he reads a lot.
It's been said that good writers are good readers. One of the best ways to learn is from the best. A writer could learn about writing from a professor who's never published a book, or they could read a best-selling author and see how that author handles a situation that they are having a problem with.
So, if you read a good book, and see a situation similar to one that you're writer friend is having a problem with (whether they know it or not), recommend the book to them.

10. Be Supportive
If your writer friend submits anything, they'll get a rejection at some point. That's one thing friends are there for, right? ;)

Share more in the comments...
Posted by Unknown at 2:06 PM No comments: