Today's Book Review: The Irresistible Novel: How to Craft an Extraordinary Story That Engages Readers from Start to Finish, by Jeff Gerke

"Discover Your Voice and Enthrall Readers!
The craft of writing is filled with various debates: Should I include a prologue? Should I delete all adverbs from my manuscript? Just how much backstory--if any--can I include in my story? These questions--and their often-contradictory answers--can cause confusion, frustration, and even paralysis in the writer.
The Irresistible Novel frees you from the limits of so-called "rules" and instead provides you with a singular goal: You must engage your readers from beginning to end. Filled with down-to-earth discussions on the various debates of writing, as well as innovative research on neuroscience and reader response, this book shows you how to:
Readers want to be swept away by your stories. When you eschew the rules and focus on your readers' desires, you're free to write truly irresistible fiction."

The back of the book sums it up nicely, so I'll just give an example.

Chapter 78 is about Outlining. I've read at least six writing books that have said that pantsers are all amateurs, and real novelists always outline. But then I've talked with some award-winning authors who don't outline. What's the truth here? In The Irresistible Novel, Jeff Gerke gives both viewpoints about outlining, then his thoughts (he does a little of both.) Basically, everyone's different, and as long as you can still have good story structure, go ahead and write away with no outline.

That's part one. Part two covers the brain science of engaging readers, what goes on inside a reader's brain when they get sucked into the story. Part three covers a few different broad tools that help you engage your reader.

I really recommend this book for two different groups of people: writers who have read all the "rules" of writing fiction, and are feeling confused and/or inhibited by them. This book is really freeing for them.
The other group of writers who will find this book a valuable resource are writers who have a solid story, but want to hook readers faster, suck them into the story and keep them there.

All that, and it's not a dry read, either! Five stars!

Posted by Unknown at 1:07 PM No comments:

Book Review: The Legend of Sheba

"There is the story you know: A foreign queen, journeying north with a caravan of riches to pay tribute to a king favored by the One God. The tale of a queen conquered by a king and god both before returning to her own land laden with gifts. That is the tale you were meant to believe. Which means most of it is a lie.

In the tenth century BC, the new Queen of Sheba has inherited her father’s throne and all its riches at great personal cost. Her realm stretches west across the Red Sea into land wealthy in gold, frankincense, and spices. But now new alliances to the North threaten the trade routes that are the lifeblood of her nation. Solomon, the brash new king of Israel famous for his wealth and wisdom, will not be denied the tribute of the world—or of Sheba’s queen. With tensions ready to erupt within her own borders and the future of her nation at stake, the one woman who can match wits with Solomon undertakes the journey of a lifetime in a daring bid to test and win the king. But neither ruler has anticipated the clash of agendas, gods, and passion that threatens to ignite—and ruin—them both. An explosive retelling of the legendary king and queen and the nations that shaped history."

So, most of what I review is science-fiction or fantasy. This is historical fiction.
What all do you read, you ask? That's easy. I like books with words. ;)

Anyway, the plot is what it says it is, a historical fiction account of the Queen of Sheba. Tosca has done a lot of research to make the book as accurate as possible, while presenting the historical figure as a real person.

The story was a fun, engaging read that kept me interested, despite already knowing the end outcome. (You can't really expect a surprise ending from historical fiction... well, unless you know nothing about the time period...)

I quite enjoyed the book, four stars! 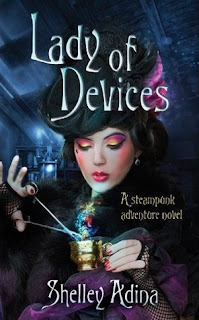 Today's Review is Lady of Devices, but Shelly Adina

London, 1889. Victoria is Queen. Charles Darwin’s son is Prime Minister. And steam is the power that runs the world.

At 17, Claire Trevelyan, daughter of Viscount St. Ives, was expected to do nothing more than pour an elegant cup of tea, sew a fine seam, and catch a rich husband. Unfortunately, Claire’s talents lie not in the ballroom, but in the chemistry lab, where things have a regrettable habit of blowing up. When her father gambles the estate on the combustion engine and loses, Claire finds herself down and out on the mean streets of London. But being a young woman of resources and intellect, she turns fortune on its head. It’s not long before a new leader rises in the underworld, known only as the Lady of Devices.

When she meets Andrew Malvern, a member of the Royal Society of Engineers, she realizes her talents may encompass more than the invention of explosive devices. They may help her realize her dreams and his . . . if they can both stay alive long enough to see that sometimes the closest friendships can trigger the greatest betrayals . . .

The beginning of the book is a little slow, as it sets up the alt-Victorian setting, and the plot that will catapult the rest of the story forward.

Claire is a really fun main character. You can sympathize with her right away... a smart young woman who society wants to cram into a boring life... but Claire isn't having any of that, and forges her own path much to the chagrin of almost everyone she meets. When she finds herself homeless, doesn't panic, but instead takes over the gang of ruffians that stole her car... and improves their lives as she makes them her friends.

Speaking of said ruffians, they're one of the best parts of the book. Snouts, who becomes here right-hand man, Tigg who adores her (mostly because she has a car...), Jake, who might betray her at any time, the moppsies, 8 year-old twins who are more street smart than most adults, and little Willie, who can't or won't talk.

After Claire becomes homeless, the plot picks up and becomes a really fun ride. All the characters have depth, and I loved spending time with them in their world.

What I didn't like:
Either the author doesn't have a really good understanding of physics, or things work differently in this story world. She goes a little too much into detail about why the internal combustion engine fails, and explanations of how "electriks" work are just plain hooey... sometimes less is more. But, I'll forgive that as this is alt-history, and I consider steampunk to be a sub-genre of sci-fi, so wonky "science" kinda comes with the territory.

Speaking of "eletriks", why the "k" in the spelling? Sure, it adds flavor, but my brain kept tripping over the strange spelling of an otherwise normal word. There were a few other such odd word choices in the story. As I said, they do add flavor and setting, though...

Overall, I give it four stars. (and the e-book is free, so why not. Although, you might do what I did and buy the next books in the series when you're done...)

Leave a Review, win a book.

Leave a Review, win a book


Realm makers was this last weekend.... so much fun. More on that later...

I went to the Realm Makers convention and met a bunch of friends, learned a lot, and bought a bunch of books. After I bought the books, I won the "best costume" award. 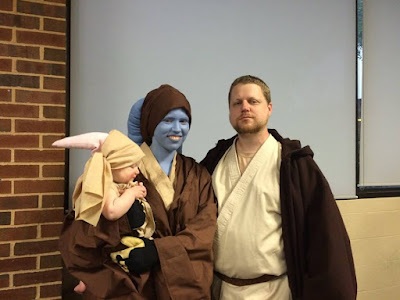 Well, okay, my wife and youngest daughter won, and I kinda tagged along for the ride, but anyway...

The prize was a big stack of books! 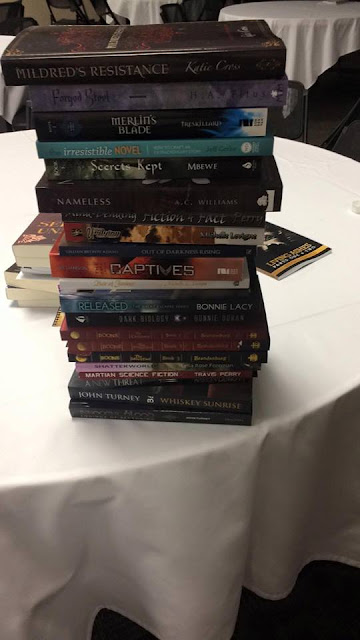 Some of these are duplicates of the books I'd already paid for, so... my loss is your gain. I'm giving away the extras! 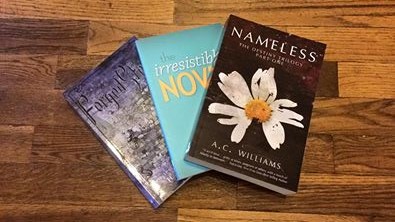 Did I mention these are all signed by the authors? (No, not personalized, just signed...) Yes, I'm giving away:

- Forged Steel, by H. A. Titus
- The Irresistible Novel, by Jeff Gerke
- Nameless, by A. C. Williams

(If you want, I can give out a signed paperback copy of A New Threat instead)

So, what do you have to do to win?

Read my book, A New Threat, and leave an honest review somewhere, fill out the form below, and win!

What, too hard? Fine... I'll give out a free e-copy for you to review. You guys are tough, come on, the book's only 99 cents on Amazon... Anyway, if you want the free e-copy, send an e-mail to: freecopy a t aarondemott dot com, and I'll e-mail you a copy (specify whether you want ePub, mobi, or PDF format).

After Rafflecopter picks a winner, and I verify that they really did post a review, I'll contact the winner, and ship them their choice of book!

What happens to the books the winner didn't choose, you ask? Well, I'll either host another contest later, or, if I get a big response to this contest, I might give them all out... so send this to all your friends!
Posted by Unknown at 9:28 PM No comments: