"Have at You! Cyrus Solburg is a young man who dreams of becoming a Hero in a fantasy world in which Heroes owe monthly dues and Villains are allowed only one eclipse per fiscal quarter. Cyrus becomes the apprentice to Sir Reginald Ogleby, also known as the Crimson Slash, a towering swordsman with a titanic sword and a penchant for self-narrating his own battles. It's up to Reginald to train Cyrus in the essentials of Heroism so that one day, at the conclusion of his first Quest, Cyrus may become a Hero, Second Class. More is afoot than the routine of training in the arts of Heroic Derring-Do, however. A bona fide Arch-Villain is on the loose. And this Villain is particularly interested in Cyrus, not least because of how Cyrus seems to have magic coming to him in spite of himself, resulting in tremendous disruption of the magical planes. Entering into the fray come a wise-cracking Dragon, a petulant gargoyle, the Heroes' Guild, the Army of DarknessTM, and a horde of cursed invisible Centaurs. Cyrus will have to call on his friends, a beautiful young cat girl, and all the power of the Capital Letters and Arbitrary Numbers if he is to live to become a full-fledged Hero. *** When Mitchell was 10 he and his friends created an adventure game called Quest. Mitchell played all the supporting characters, quest givers, and (his favorite) the villains, while his friends played the brave heroes who thwarted them. That game became the basis for Hero, Second Class. Mitchell is a young man with theatrical inclinations, a wry sense of humor, and storytelling ability well beyond his years."

First, this book parodies the fantasy genre. So, there are a lot of bits that are "bad writing", but they're done that way to make fun of a cliche. This works... most of the time. There were many such moments throughout the book that made my laugh out loud. However, there were also quite a few that made me think: "Okay, I get the cliche that this is making fun of, and said cliche needs mocking, but for the same reasons the cliche is painful to read, this passage is also."

So, I'm not quite sure what I thought of the book over-all. Most of the characters are parodies of cliches... which are funny, but that makes it really hard to connect with them. Also, it took me a really long time to read.. there were times when I just put the book down and didn't come back to it for a few days. I'm not sure if this was the story, or just that I've read about five fantasy books in a row...

Anyway, three stars. I liked it, it just didn't suck me into the story. 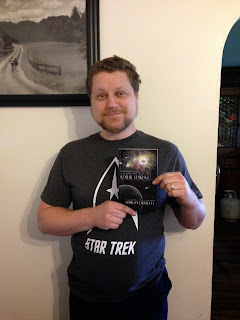 A New Threat is on a book tour right now. Follow the link below, and you could win a paperback copy! (Not to mention read some interviews and stuff...)

Oh, did I mention the paperback copy will be out soon? I got the proof copy the other day, and there's a few tiny details to fix, then I'll post and let everyone know when it will be for sale.
Posted by Unknown at 4:29 PM No comments: