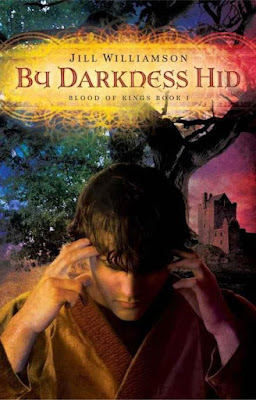 "Given the chance to train as a squire, kitchen servant Achan Cham hopes to pull himself out of his pitiful life and become a Kingsguard Knight. When Achan's owner learns of his training, he forces Achan to spar with the Crown Prince--more of a death sentence than an honor. Meanwhile, strange voices in Achan's head cause him to fear he's going mad. While escorting the prince to a council presentation, their convoy is attacked. Achan is wounded and arrested, but escapes from prison--only to discover a secret about himself he never believed possible."


Achan is an interesting character. Despite being treated like crap, he tries to do the right thing and have a positive attitude.

Vrell... I don't know what to think of her. She's an interesting and sympathetic character, but I'm sure both her and her mother are morons. Okay, I get that she wants to hide so the nasty prince can't marry her. Let's see, we could disguise you as a boy. Boys don't ever pee or change in front of each other, right? What could possibly go wrong? While we're at it, let's also disguise you as a stray, they're treated worse than slaves and anyone can abuse them without consequence. Just to be extra safe, let's only tell one other person that you're really a noble. Great plan, right! And then she makes it worse by not telling anyone that could help her. So, nice girl, but really dumb.

I really liked the story world. For the most part, it's a standard fantasy world... except half the continent is perpetually covered in darkness. That's pretty unique, and it made me wonder how that works. Are there plants there? If so, how do they grow? What do the animals and people eat? Apparently there are several thriving, strong nations over there. Sadly, the book doesn't explore these questions, but it is book one in a trilogy, so I have high hopes that book two will go into some of that stuff.

One of the main plot lines was fairly predictable, but there were enough twists and other stuff thrown that it didn't bother me. The whole "bloodvoiceing" thing was neat, I've never seen a fully realized telepathy system in fantasy before (the generic "wizards think to each other via 'magic'" doesn't count), and the way this ability interacts with the politics and characters is interesting.

It was a nice, fast read, and I look forward to the sequels. I give it four stars