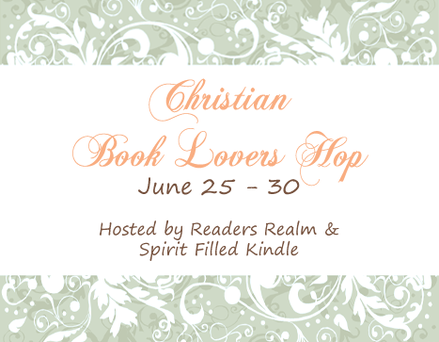 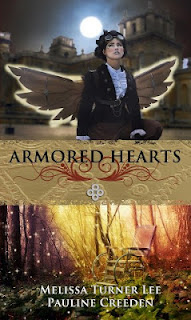 The Christian Book Lovers Hop is still going on!

Last time, I told about Armored Hearts, and that I'm giving away a copy.

Today, we have an interview with the authors.

- Was collaborating frustrating at any point?

Pauline: Not particularly, Missy Lee and I get along well and I didn’t feel that we argued about any particular point at all…

Melissa: I don't think it was frustrating. Pauline might say differently. Some ideas she had or I had, we didn't always agree on but I think we compromised well. At least I hope so.

Pauline: We researched the time period to make it as historically accurate as possible – even though it’s alternate history.  Wikipedia was very helpful :)

Melissa: I had to research English Peerage and how titles worked, were handed down and how people were addressed. It was all so formal. I also researched what actual women were doing as far as seeking rights. At that time, a woman with a brother could not inherit an estate. She could not own property if she was married or had a living father or brother. I researched what they believed about women's education. Girls in noble families did not go to school. That were taught just enough at home by a governess because it was thought that study was unhealthy for women. The medical books taught it would make a woman sterile if she studied difficult subjects such as science or math.

- At least one review I've read said they didn't like the book because it was way too feministic. I don't agree, but I do see where they're coming from. It seems like, in the world of Armored Hearts, it's mostly just the females who invent things. Did you write it that way on purpose, or did someone just get there shorts in a twist because we've just seen that issue through one or two characters viewpoints?

Pauline: In true history, women were put in their place which is to say they were not at all prized for their intelligence.  So as we wrote AH, we wanted to show that they were inventors alongside men – and in further episodes, I’m sure we’ll show just that.

Melissa: The book is set in Edwardian England instead of Victorian England. Progress and automation was already happening...by men. We mention automobiles are parked outside the house in preparation for the wedding. It wasn't my intention to make it look like only women were inventing but that women and men see things differently and that perhaps if the women had a say in the process too, there would be more variety in what was being automated and how during that time. I am not a feminist in the sense that women should rule over men etc. I do think according to the Bible, women are equipped to do much more than cultures have allowed due to picking and choosing certain verses over others to stress as important. Parts of the Bible clearly show women served in the early church. Proverbs 31 shows that a woman can have a mind for business and it is a good thing. There is a verse addressing an issue in one church that tells that church to have the women causing problems in that church to "keep silent." We need to read all the Bible and look at context.

- I loved the balance of steampunk tech, romance, and fantasy, but I see some fans wanted more devices. Will we see more tech, fey magic, a continued balance, or all of the above in Armored Hearts 2?

Pauline: There will be all of the above :) no one will be neglected!

Melissa:  That is the plan. I really hope we do not disappoint.

- It was a little unclear if Gareth and Jess ever consummated their marriage. The way that topic was approached and worded was period accurate. But it's got me wondering. I got the impression that they did, but my wife thinks they decided to wait until Jess was feeling better. Who's right?

Pauline: Your wife is right, they decided to wait.

Melissa: You know, I don't know. I was scared to go there. I had some people quite upset with me about how I handled a honeymoon in another book (It was not graphic. Would never write that.) Jessamine was so flirty that I was afraid that might already be over-the-top for some folks. And I did get messages that it was for some. I can't please everyone. I think they are waiting on Jessamine to recover. We will find out.

- It seems like AltWit Press has a few novels that show the whole of a romantic relationship, instead of portraying just lust and calling it love. Is this on purpose? What are your thoughts on this issue?

Pauline: Society certainly has a lot of lust without us adding to it.  While at the same time people are starting to disbelieve in love itself.  Our goal is to show that love exists and is still alive and well, and our hope is that by reading the kind of stories we publish, people will learn the difference.

Melissa: I'm not sure what AltWit's view is. I have always seen a parallel between romance and how God pursues us. There is a special connection between a husband and wife that mimics that spiritual connection. It tells a story to the soul about The Ultimate Love Story when you tell a genuine love story. I'm not a prude and I don't think God is either, given that He created intimacy and included a whole book of the Bible devoted to the physical love of a groom and bride the draws a comparison Himself. I don't want to feed what the world is tainting, but I also don't want the world's view to taint our view of the whole picture of love between a husband and wife.


Enter to win the copy of Armored Hearts:

Posted by Unknown at 1:59 PM No comments:

For the blog hop, I've giving away a copy of Armored Hearts... signed by the authors!


When a crippled young lord rescues a girl falling from a tree, it reveals a secret about himself and his mother's side of the family that could put him at the center of a war with beings he thought only existed in fairy tales. Tristan Gareth Smyth lived his entire life stuck at home at Waverly Park and left behind while his Grandfather makes trips to London, all because of his blasted wheelchair. Then an American heiress falls in his lap, literally, and he must find a way to keep her at a distance to protect not only his secret, but everyone around him from an assassin sent to kill him."
I read this book a few months ago and loved it, you can read my review here.

Posted by Unknown at 9:00 AM No comments:

With a curse, she will build an army. With the dagger, she will undo the last sacrifice. But first the sorceress must find the secret keeper.

From the back of the book: Torn from her homeland and thrust into a betrothal against her wishes, Ayianna learns her family has a deadly secret that now has her on the run. She joins forces with Kael, an embittered half-elf, and Saeed, an elderly High Guardian, to seek answers to her father's death, the destruction of Dagmar, and the plains people's bizarre behavior.

Ayianna discovers there is more at stake here than just her mother's disappearance and her familial duty to her betrothed. The sorceress has cursed the plains people, and it is a race against time to release them before the sorceress resurrects an ancient evil.


This is the full-length novel by J.L. Mbewe set in the same world as the Desert Rose and Dragon Thief short stories. If you haven't read those yet, go do so!

Enter to win a bookmark!


a Rafflecopter giveaway
Posted by Unknown at 9:52 AM No comments: