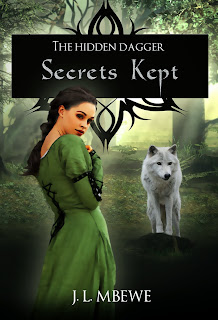 Today's book review is Secrets Kept, the first in a new fantasy series by J.L. Mbewe.

"With a curse, she will build an army.
With the dagger, she will undo the last sacrifice.
But first the sorceress must find the secret keeper.

Torn from her homeland and thrust into a betrothal against her wishes, Ayianna learns her family has a deadly secret that now has her on the run. She joins forces with Kael, an embittered half-elf, and Saeed, an elderly High Guardian, to seek answers to her father’s death, the destruction of Dagmar, and the plains people’s bizarre behavior.

Ayianna discovers there is more at stake here than just her mother’s disappearance and her familial duty to her betrothed. The sorceress has cursed the plains people, and it is a race against time to release them before the sorceress resurrects an ancient evil."

As mentioned, Secrets Kept is the first in a series of novels, but the author has released three short stories in the same universe as a prologue of sorts for the novel: Desert Rose, Dragon Thief, and Indestructible. You don't need to read the short stories to enjoy the novel, but they do introduce you to the world, and give you some background to Nalu that's useful, but not necessary to the story. (a few of them introduce some background characters as well.) I enjoy when an author does this, because you get to play in the world a little, but it doesn't bog down the main story.

The antagonist is Semine, a powerful sorceress who's basically out to destroy the world... well, she's trying to release the demoness she's bound to, but same thing... ;) In this, the first book of the series, she only gets hints of character development, but that's because she's a minor character in this book. I get the feeling she'll be more important later on. If you really want to get to know her, her character is fleshed out in much more detail in Dragon Thief.

Kael is one of our main characters. He's kinda mopy, but you would be too if you'd just seen your best friend killed, and now have to drag his useless sister and her even more worthless fiance through an enchanted woods...

Ayianna is our main character. I don't know what to think of her. One minute, she's strong and determined, the next she's bemoaning her fate, yet still determined to marry a man she doesn't know, and doesn't love just because her Dad set it up to save the family from financial ruin. She's similarly whishy-washy about the people out to kill her for who-knows-why. Sometimes she's strong and does what she can to help, other times she clings uselessly to her betrothed or Kael... Over-all, though, she does grow throughout the book and shows just enough backbone and promise to keep me rooting for her.

The book is well-written, and kept me sucked into the story and interested. I don't remember any boring parts, or parts that made me want to skim. There were some parts where I wanted to reach in and slap a character, but that's a good thing. ;)

As for how to evaluate the story as a whole and rate it, this is where I feel a rant coming on. And it's not really the fault of this book, it's the whole modern fantasy genre as a whole. This is one of those books that doesn't have an ending, you just turn the page in the middle of the story and find the back cover. A lot of books, and fantasy especially are doing this, spreading the plot of one story across multiple books. To me, it's like saying; "Knock-knock", and when the person answers; "Who's there?" replying with "Well, wait a year or so, give me another six bucks, and then I'll tell you the punchline."

I prefer each book in a series to have it's own beginning, middle, and end; it's own plot-lines that come to a satisfying ending, and them a few other plotlines that carry across the series.

I'm not, however, signaling out Secrets Kept as being a bad book because of this. Overall, I did really enjoy it, and I do want to buy the sequel. The problem is that I want to read it now. Perhaps if series written in this manner had a logo of some sort, then fans of this plotting style would know it's something they'd love, and I'd know to wait to buy the book until the whole series was written, then I could read them back to back.

This is also a problem when it comes time to rate the book. I live to give an almost holistic type of rating, where I'll give points for characters I love, deduct them if a character I love dies, or if a plotline is unresolved and whatnot. Which is impossible to do here. On the one hand, I'd give the book three stars because there is no ending. I don't know how everything turns out. On the other hand, this isn't fair because of course I don't know, it's not finished yet. By the same token, I'm tempted to give it a five, because I DID really enjoy reading it, and I want to read more, but, if in a later book, something happens with the plot and characters I don't like (for example, a book with an unhappy ending will never get five stars from me, and it'd better be at the pinnacle of it's genre to even eek out four...) or doesn't make sense, or isn't well thought out, I can't come back and change it. And, as I said before, it's not just this book that's doing it.

So, for now, I think I'm tentatively giving it four stars and hoping for the best from the next books. If the next books in the series show the same qualities or better, then the rating is justified, or may even go up.

Overall, if you don't mind being left hanging in the middle of a story, you'll love this book.

Posted by Unknown at 1:18 PM No comments: