Interview with Tomed Nor 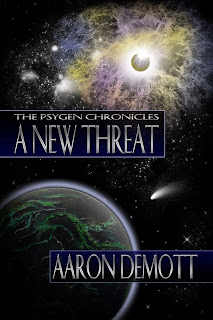 The paperback version of "A New Threat" is now out! To celebrate, we're doing two special things:

- Ella Font with the Inter-Dimensional News Network has an exclusive interview with Tomed Nor. Keep checking back, she's also going to be interviewing Bast, and Nilre and Ara over the next few days.

The interview with Bast is up now...

Buy the Kindle version now...
Posted by Unknown at 9:57 AM No comments: 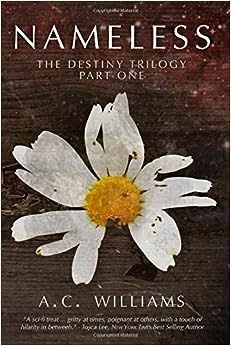 "A girl with no memories. A man with too many. And an assassin who starts a war to find them.

On the seedy backwater moon where a NUSovian ship dropped Xander off to scratch a living among the mines and brothels, true friends are a luxury she can’t afford. What kind of person doesn’t know her own name? Waiting tables and fending off amorous drunks barely earns Xander enough to survive, let alone escape to the civilized colony of NUSaxony to find a nuerotherapist who can help her regain her lost memories.

An ex-assassin on the run from his own past, Kale and a team of bounty hunters as eclectic and derelict as their ship saves Xander from a syndicate operative who started a space colony war to find her. They race against time, seeking the spaceship that holds the key to Xander’s memories before the syndicate catches up with them.

As the net closes in, Xander faces a choice.

Is finding herself worth the price her friends will pay? Or does true friendship mean sacrificing Xander’s memories—walking away from everyone she loves—to keep them safe?

After all, some things are more important than a name."

First, I'm going to get out of the way what I didn't like, because there's so little of it, yet it may be important for some readers.
There's quite a bit of swearing in this book. It's all "mild" swear words, no f-bombs. Which is going to set me off on a rabbit trail, so if you're in a hurry, skip ahead a few lines. Anyway, sex in the book (more on that later) is referred to as "tumble" or "tumbling". On the one hand, I like this, as it gives some setting to the book. However, every time you see the word "tumble" you could replace it with an f-bomb... most other books do. So, if there's other "mild" swear words, why not this particular one? I've never understood why one swear word is so much worse than any other (with the exception of mis-using the names of certain deities... but that's another rant...)

The other thing I don't like. There's a handful of sexual situations in the book. And not the good kind. Xander almost gets raped a few times, fairly graphic in detail in one of them. This is a problem for me. Women should NOT be treated that way. It was a bad guy who (attempted) to do it, and she gets out "intact" (mostly), but I don't like reading about it. Fiction, to me, is at least partially an escape where I can pretend such evil doesn't exist, or at least that the good guys stop it. At the very least, I'd like to see the subject explored more. It happens, she's saved in barely the nick of time, then everything's fine. I'd liked to have seen: A. The bad guy who did it terminated with extreme prejudice, and B. Xander and her friends dealing with the trauma. She just shrugs it off and goes on with life. 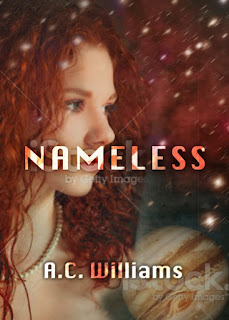 I'd give the book a PG-13 rating for these two things.

(Also, there's the cover. It makes sense and is a very good cover... if you've read the book. If you haven't, it doesn't scream "space opera". Oddly, one of the cover concepts from the author's website fits the book much better...)

Anyway, on to what I loved.

Have you seen the anime Cowboy Bebop? If you have, and you liked it, you'll love this book, and that's all I need to say. For those that haven't...

Xander has amnesia. All she knows is that she was dumped off on the worst place in the solar system. Despite this, she has a good attitude, and tries to do the right thing. She eventually meets up with a group of bounty hunters. Spike has a mysterious past, Faye is kind of a jerk, Jet is tough but has a kind heart, Ein is a dog, and Edward is just a weird little girl... I may have got some of the names wrong... ;)

I couldn't put the book down. Great characters, the plot moves along fast and sucks you in, and it's set in a nicely realized universe with colonized moons, all kinds of different space ships, and filled with several different political/social groups. I really enjoyed spending time here, and I'm so going to buy the sequel. (The ending is abrupt, and makes you want to read the sequel right away...)

I could go on and on about what I loved... but it'd be full of spoilers...