If you want that list in text, instead of an image, keep reading. Also below, I'll update the post throughout the year as I read book with the title and author of books that meet each challenge, along with a little commentary on them.

I'm going to put the Sherlock Holmes novel "The Valley of Fear" here. I could've sworn I'd read all the Holmes stories before, but I had no memory of this one.

I think the Holmes stories work better as short stories. Both this and "A Study in Scarlett" are more two books in one... one part Holmes story, and the other an adventure tale that doesn't share any qualities with a Holmes story, other than giving the needless background on the crime Holmes solves... after he solves it.

So, I enjoyed half the book.

2. A book that was made into a movie

3. A book you pick solely because of the cover.

Really nice cover, and it was free. Story is decent, but could use a little tweaking, in my opinion. Read my review for more.

4. A book your friend loves.

5. A book published this year.

6. A book by an author you've never read before.
Star of Justice

I've known Robynn on Facebook (from mutual acquaintances) for a while now, and I finally got around to reading her book. Review here...

7. A book by an author you love.
Realm Walkers, One Realm Beyond by Donita K. Paul

11. A book you started but never finished.

16. A book you learned about because of this challenge.

17. A book that will make you smarter.

18. A book with a blue cover.
Mindstorm: Parley at Ologo by Cindy Koepp.
Cindy is probably my favorite living author. Everything she writes is fantastic.

19. A book you were supposed to read in school, but didn't.

22. A book with pictures.
Star Wars: The Jedi Path

It's an in-character instruction manual for Jedi initiates. A neat collection of Jedi lore from the Star Wars universe. 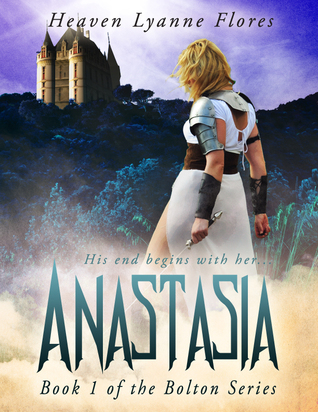 "My family isn’t human. We are from a planet called Bolton. We moved to Earth when I was just a baby. After Earth fell apart my father decided to move back, leaving the only home I’ve ever known.
The people of Bolton have known of Earth for years. We’re the reason humans have nightmares, why they believe in certain things. We’re the creatures of the supernatural. The things that live under your bed go bump in the middle of the night.
We’ve lived in harmony until the powerful sorcerer, Daruka, started terrorizing the planet. Now we cower in fear, afraid of something more powerful than us. That was until I was born.
~*~
Anastasia had only known of the nomadic life caused by the third world war on Earth. The possibility of a permanent home never crossed her mind. When her family moves to a new planet full of supernatural creatures her life gets turned upside down.
Lost and afraid of something more powerful than herself will Anastasia be able to save the only place she has ever called home?"

Despite the bit of sci-fi in the opening, the book is solid fantasy.

If the author didn't consult the fantasy cliche list while writing this book, the readers sure can re-create it while reading...
There are also a handful of typos. Not enough to distract me from the story, but....

Really, the cliches are the worst part of the story. Once you get past them, the story is engaging, and the world the story is set in is interesting and feels "real." There are other stories that use the "earth fairy tales and myths are based on real creatures/aliens" plotline (that's why it's a cliche), but the core idea used here is solid, and I've read books with worse implementations of it.

Anastasia's character is both fascinating and dull. In the first quarter of the story, she's dull, uninformed, and completely unrelateable. After that, she seems to wake up, and actually experience some feelings, and respond to the situation like a normal person.

Overall, despite the stories flaws, I still had a fun time reading it... until the end. The end wasn't bad, in fact, it was quite good (it made me want to keep reading) but it hit a pet peeve of mine.

The book just ended. She finally arrives to the showdown with the big bad.... and that's it. Apparently, the showdown is going to be in book 2, instead of here, the culmination of the story where it belongs.

So... how to rate. The cliches and typos make some reviewers give a book an automatic one. I'm not one of them. I care a lot more about story and characters. While both had flaws, I still enjoyed reading the story.
I've read other books with none of these flaws that I was just so bored with that I just couldn't finish, so Anastasia should rank higher than that... but that ending...

Oh well, I'm a push-over, and as a whole I enjoyed it, so, three stars.

This is the place where I'd post an Amazon link, but since I've downloaded the book, I can't find it... anywhere... but I still read it, so I'll still review it.

Posted by Unknown at 1:50 PM No comments: