A day or two ago I talked about titles, today, we're talking covers. Specificaly, how I came up with the current cover for A New Threat.

I knew I wanted a planet on the cover, since most of the story takes place in space. It also lets potential readers know right away that this is a sci-fi story.

I stumbled upon (literally) this site, that had a tutorial for making planets in GIMP:
http://mygimptutorial.com/the-ultimate-gimp-planet-tutorial

Using that, I made a planet and basicly slapped a title over it. This was just a placeholder:

I didn't like the white font though, looks too sterile and plain. So I made it yellow and added the series name: 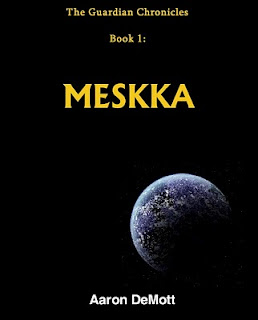 This looked better but still a little "blah". Also, the proportioning is wrong. (Sadly, I didn't even think of this until I loaded the book into iBooks and saw it looked weird...) 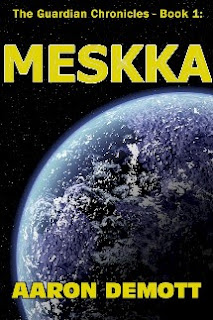 For version three, I fixed the sizing issues. I also decided to show only part of the planet, and make it fill the cover. The effect I'm going for here is a similar look to one that you'd get looking out the viewer of an orbiting spacecraft.
At this point, I had friends at The Anomaly look at and comment on it.
Several issues were pointed out. Mostly some spacing issues with the various lines of text, and also that "Meskka" looks funny. I'd applied a text effect to it, trying to make it "pop", but...
At this point I tried out a few suggestions: 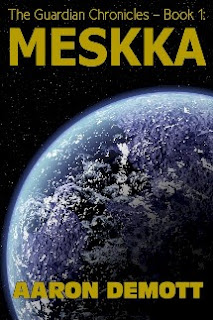 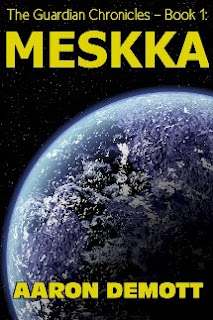 For those tests, I fixed the font spacing, and tried out a darker font color.. I didn't like it...
At this point, I also had a discussion about the title. You can read about that in the last post.
And so, the current cover was born: 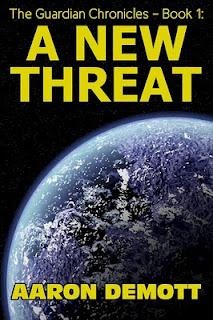 I might make some more changes yet. I'm thinking about adding some illustrations of two of the characters superimposed over the planet, but I'm not really an artist, and I'm not sure if I really want to do that or not.
Posted by Unknown at 5:36 PM