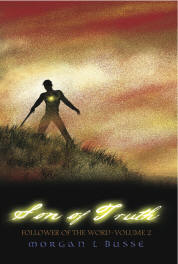 I just finished Son of Truth, the eagerly awaited sequel to Morgan Busse's Daughter of Light.

The sequel starts out right where Daughter of Light left off. Nierne's story continues as she her situation gets even worse. Caleb struggles with what happened to him in the first book.
We get a tensy bit of romance, but Lore and Rowan are... well, not much happens here yet...

You've been warned... If you don't want the spoilers, my over-all take is: if you haven't bought this already, wait for book three, then read the whole series in one sitting.


The Good:
The story picks up right where Daughter of Light left off, and picks up on all the loose ends from that book. Well, if you can call it a loose end if it's an over-arching plot threat meant to span multiple books in a series. I don't.
This is a great story, and it's shaping up to be a great series.

The Bad:
When all's said and done, not much happens in this whole book. Sure, it's a great read, I stayed interested until the end (more on that later), and it did follow up on plot threads, but that's about it. Not much happens in the whole book, except getting characters in place for book three. Granted, we need this to happen, and the character development is great, but still.
In the first book, we have introductions, characters get into position, and world-changing things happen, then the end. In Son of Truth, we have just the first two things.

The ending. Oh my. I was reading along, flipped the page.... and it was over. The whole book is awful things happen to Nierne (how does one pronounce that, anyway?), Calab tries to figure out what how to be a good guy, awful things happen to Rowen, Lore finally arrives, then everyone heads off (via different means) to fight the big bad first mentioned in book 1... then it ends... That's right... it ends with everyone in transit.

I think the problem here is that there are basically two ways to write a series of books (well, probably more, but they boil down to two.):

I'm a big fan of the first type, and really only like the second type if I discover the series after it's all been written. I don't like reading part of a story, then waiting FOREVER for the rest to come out.

I also think the only reason the second type of series exists is because people try to imitate Tolkien. The problem is that The Lord of the Rings was written as one book. The only reason it's three books is because it wasn't physically possible publish that big of a book in one volume (still isn't, in most cases...)
It's purely my opinion, but I feel that this type of series also encourages sloppy writing. It's possible to get the same characterization and plotting for most of these types of series in about half the amount of books.

I don't really know what to rate this. I'd give it a three just for the ending and lack of goings-ons... but then I really did enjoy every minute of reading it. I think I'm going to rate this whole series as one big book (and in the future, re-read it as such.) In that case, I give the series over-all a 4, with the possibility of moving to a five, depending on what happens.

I'm going to keep an eye on this series, and not review any more books in it until the series has ended, then re-read it in one big chunk and rate it as such. This might be a bit of an odd way to do it, but thinking about it, it's what I've done with The Lord of the Rings. I'd give that series a five, but each of the individual books (except book three) only gets three stars. Book one started very slow, and nothing really happened in book two (sound familiar? ;) ), and book three got a four. Yet, taken together, the whole series was.... well, it created it's own genre (with an assist from Chronicles of Narnia...)