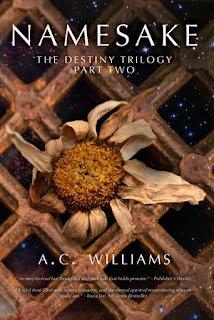 "Xander and her friends onboard the bounty hunter ship, Prodigal, risk their lives to recover the derelict spaceship that could restore the shattered pieces of her memory. No one realizes what that decision will cost them.

A ruthless syndicate is determined to capture Xander by any means necessary. For protection, she turns to top Prodigal hunter and former assassin Kale Ravenwood, but as their relationship heats up, so does the syndicate threat. The closer they grow to each other, the more danger they face, for Xander can’t remember enough, and Kale remembers far too much.

Xander’s search for her memories leads her across the solar system, only to discover the unbelievable secret of the Destiny Project. When Xander learns the truth of her identity and origins, she must choose between the comfort of her former life and the new, dangerous life she has come to know and love.

Either choice means sacrifice. What would she rather give up—her friends or her name?"

First, this is the sequel to Nameless (which I've reviewed here.) I LOVED Nameless, so I was really looking forward to the sequel. Sadly, I was disappointed. I'm not sure how to review the book without discussing major spoilers, so you've been warned. Let's see, two stars, it hit several major pet peeves of mine, you might like it if those things don't bother you. I think that's as spoiler-free as I can do. If you want to know why I didn't like it, keep reading. If you don't want spoilers, stop reading here.


I'll get to the two things that really made me dislike the book in a moment. This first thing is a minor irritation, but it added to the effect. Namesake is the middle of a trilogy. Thus, it suffers from the same lack of anything happening as most middle books do. To be fair, Namesake does it better than most. There is a beginning, middle, and end of this book, but since it's in the middle of the overall story, the main plot threads are unresolved. If this were the only issue I had, I'd just ignore it. Like I said, it's the middle of a trilogy, and AC Williams handles this problem way better than most authors do.

There is no happy ending. Namesake ends on a real downer note. I hate unhappy endings. Perhaps this doesn't bother you, but it's one of the three major things that will make me quit reading a series/author. Now, this is the middle of a trilogy, so there might still be a happy ending, but at the way things are at the end of the book, I can't see how.

Everyone dies. That's number two on the "How to get me to quite reading" checklist. In the first three chapters, we lose FOUR main characters! Holy crap! By the end of the book, only Xander (and one bad guy that we've met before, but that doesn't count. I don't mind if they die) is left alive.
Yeah, I know all the arguments about being a better writer by killing your characters, blah, blah, blah. I, personally, as a reader HATE this. I know some people like it, but they're wrong. This one item alone is enough to make me quit reading a series/author.... but we're not done...

Xander is brutally raped and tortured. The scene isn't written explicitly, but still in way too much detail for me. Sure, this fits in the hellhole of a world the characters inhabit, and some would argue this makes the story more "real." Screw that (no pun intended.) The real world is awful enough. When I want to read a story, I want hope for a better future, I want to spend my time in a world where the good guys stop things like that from happening... wait, the good guys are all dead...
I could see how, in book three, this could bring a message of healing and hope or something to people that have been through something awful... but I'm not that target audience. Maybe it's because I'm a male, or have read too many hero stories, or respect women too much, but I can't stomach reading that kind of thing. To me, when I'm reading and a book is well-written, and Namesake is, it's like it's really happening to a real person that I care about, and I can't do a thing about it, and that bothers me.
Yup, this is number three on the "three ways to get me to quit reading a series/author" checklist.

So, this book has everything I can't stand in a story. Two stars.
Why not one, you ask? I'm really hard to get either a one or a five star out of. Out of hundreds of books I've read, I've only read one (maybe two...) that I'd give a one star rating to. It would have to have at least one of these three things, and bad writing, and a horrible plot, and characters I couldn't stand. Namesake has a great plot, and characters that I love.
Posted by Unknown at 10:55 AM