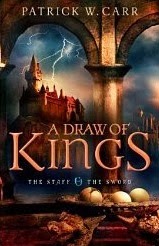 A Draw of Kings is the third book in the Staff and the Sword trilogy by Patrick Carr. (The first is A Cast of Stones)

"Dark Forces Have Gathered and the Final Battle for Illustra Has Begun.
Their journey to Merakh should have made Errol and his companions heroes of the realm. Instead, they've been branded enemies of the kingdom.
In the wake of the king's death, Duke Weir is ruling the country--and he intends to marry Adora to bring an heir from the royal line. With Errol and the others imprisoned and the identity of the rightful heir to the throne still hidden in secrecy, Illustra is on the verge of civil war--and threatened by hostile forces gathering on every side.
A dangerous mission to free Errol is attempted, but the dangers facing the kingdom mount with every passing moment. The barrier has fallen, ferrals are swarming toward the land, and their enemies draw ever closer. Will the discovery of the true heir turn back the tide of Illustra's destruction?"

The final book in the trilogy has all our favorite returning characters. Errol actually gets some respect for a change... and then he volunteers a suicide mission this time. Adora gets fleshed out into a full character in this book. We got to see a little of that in A Hero's Lot, but she gets almost as much screen time here as Errol (I still say Rhoka's a better match for Errol, but... ;) )

Being the final book, I can't talk much about it without spoilers, but I'll try...
All the plot threads are wrapped up nicely, and it doesn't feel like anything has been stretched too far plot-wise. We finally find out why the cast for the king failed, and yes, it's just what I thought it was (the reason was fairly obvious... the author practically spelled it out...) The plotline for Errol or Liam as king was handled nicely though.

One critisiam that can't be handled without spoilers, so be warned: (un-spoiler version: the ending is a bit of a deus ex machina)

So we find out that Liam is Adora's sister, and the nephew of the King. Okay, makes sense... except, why did the barrier fall if there was still a descendent? Okay, so he wasn't a direct descendent, so the barrier is down. What make it come back up, then? Errol's "death", or Liam's being crowned? If the first, that doesn't make sense, as Errol had no children, so how'd that work? If the latter, why didn't Deas reveal his will WAY long ago (you know, thousands of deaths and such ago) and just crown Liam before Rodran died? To get the book back and clean out the church? Seems there'd be a WAY better way to do that...

So short version, I thought the ending was a bit of a deus ex machina. I like that Errol didn't stay dead, though.

So, I give this book four stars.

Draw of Kings, A (The Staff and the Sword Book #3)