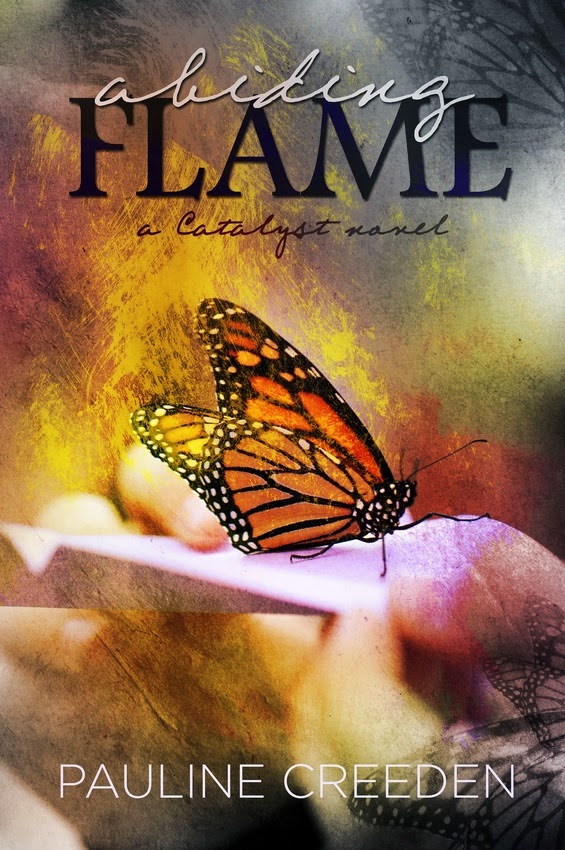 Abiding Flame is the latest sci-fi title from Pauline Creeden.

From the "Back of the Book":
"Darkness can be overcome… Terminally ill Lynette Lamb is forced to reunite her wayward son and grandson. Her options are as limited as her strength and mobility. Through a fateful series of events, the rejoined pair will leave Earth to become part of a colony orbiting a new planet. Sam Austin and his wife mourn the loss of their only child and decide to make a fresh start at the space station. The same ship holds the one who will fulfill the dark planet’s prophecy, but a demonic force boards to stop the vessel. The demon’s obedient but unwilling servant is sent on a suicide mission to keep the ship from reaching its destination."

The characters were awesome. Sam is pretty much your typical "everyman" surrounded by a whole bunch of crazy/evil. He reacts like we would. Bill great as a villain. He's evil, yet you can almost sympathize with him. Jeremy... well, I'd like to get to know his character better. At first, I thought he was going to be the main character, but it turns out not. I think he'll show up in a sequel though...

The plot is pretty good, with one minor caveat that I'll get into later. A one-line summary for the first half of the book is "What if you were the last person of your faith left on the planet?" The book takes a good look at how spiritual warefare might look, and blends that with a good sci-fi setting. This is one of the things sci-fi is good at--looking at something, and asking, "What if...?"

Also, I have to mention that it read fast and kept me turning the pages, and read bits in every spare minute. Normally, this goes without saying, but I just gave up on another book written by someone else that just didn't suck me in, so I had to mention that here. Good books are like vacuums: They suck ...you into the story. ;)

The book is going to be "too preachy" for some people. I don't think it is, as given the subject matter, a lot of faith and theology and such is going to come up, but I'll be shocked if at least one person doesn't rant about how preachy it is (and probably whines that the author should be "more tolerant" in the next paragraph, but I digress...)

Mostly what I dislike about the book is minor nit-picky things... - a part can't be machined and has to be crafted by hand because machines aren't capable of being that delicate (uh, yeaah...) - The ship is portrayed as large as a cruise ship... but is landed on Earth's surface at the beginning of the novel (this isn't really feasible, even given Star Trek type tech, it's extremely in-efficient to land such a large craft) - Jeremy gives away his Bible --one of the last left after the book was banned for being "hate speech"-- so someone else can read it, but it's okay because he typed a copy for himself (uh, if he had an e-copy, couldn't he e-mail it? And what happened to Project Gutenberg? The "Banned Books" website? I find it EXTREMELY unlikely that there isn't a single (non-hand typed) e-copy floating around somewhere, and that it's impossibly to send it to someone...)

And their's a few more, but you get the drift. Hey, If I can nit-pick Star Trek and love it, why not this? ;)

Overall, I liked this book, and want to read more... I really hope this is the first in a series, as it started to explore a theme that hasn't really been done much in sci-fi, and should be. Namely, what if there are aliens... what would that do to Christianity? The book ended before it really got to that point, but there are some hints that it's going to be explored farther.