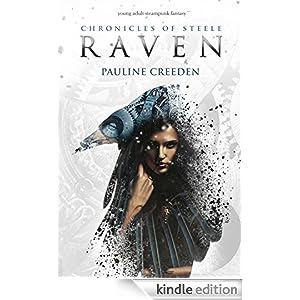 Today's Book Review:
Chronicles of Steele: Raven, by Pauline Creeden
Pauline is also the co-author of Armored Hearts, and the author of Abiding Flame.

From the "Back of the Book":
"Human life has value.
The poor living in the gutter are as valuable as the rich living in a manor.
The scoundrel is no less valuable than the saint.
Because of this, every life a reaper takes must be redeemed.

Raven has lived by this first tenet since she was trained by her father to become a reaper. But since his death, she’s been spending years redeeming the lives she’s taken. By her count, she’s even and it’s time for that life to end. If she settles down and becomes a wife, she might just feel human again. But on the way to the life she thinks she wants, the baron of New Haven asks her to complete a task which she cannot ignore… Just when Raven decides to give up on her life as an assassin, she’s pulled right back in."
The story is steampunk fantasy, and the beginning reminds me a lot of the anime "Moribito". It distinguishes itself fairly quickly after that, and I happen to like that anime, so it hooked me into the story quickly.

The story has action, adventure, and cool gadgets.  Most importantly, it has characters that I want to spend time with, and the grow over the course of the story.

I'm not sure whether to give this one four and a half stars, or five. It was really good, and I can't wait for (and for sure will buy) the next book in the series... but I'm picky with the five stars I give out. This book was very, very close, but not quite as adored as the other five stars I've given, so I'll go with four and a half.

Don't believe me? Try the first quarter of the story for free here