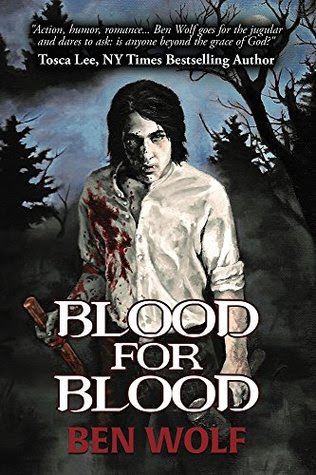 "What if a vampire got saved? Calandra, an evangelist's daughter, is amazed to watch as Raven, a century-old vampire, develops faith. As Raven ceases to drink blood and becomes more human with each passing day, Calandra cannot deny her growing attraction to him even though she is being courted by another man. Raven's newfound salvation is both a relief and a burden, as he encounters multiple vampire taboos and must overcome them. Just when Raven begins to get the hang of his new lifestyle, Calandra is attacked by bandits. Will Raven revert to his old vampiric ways to save Calandra from certain death? Or will he rely on his faith in God to help him ransom Calandra from a new brand of evil more horrifying than he ever was as a vampire?"

Hmm... how to talk about this book without spoiling the plot... Well, a vampire comes to prey at a tent meeting (see what I did there ;) ) and, well, things progress from there as stated in the "back of the book" copy.

The closest book I can think of to this in terms of plot is "The Difference between Night and Day", by Melissa Lee. Both books central concept revolve around what happens when Christianity and Vampirisam clash. Night and Day, however, is paranormal romance, while Blood for Blood is philosophical action/adventure.

Some readers are likely to complain that the book is too preachy, but I think it flows well with the story. It's set in the 1800's when tent meeting revivals were sweeping the nation, and one of the main characters is a preacher. There is a lot of theological content, but given the book's premise, that's to be expected, and it's done in a consistent way that blends with the story.