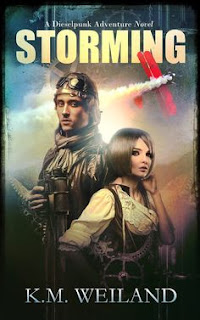 "In the high-flying, heady world of 1920s aviation, brash pilot Robert "Hitch" Hitchcock's life does a barrel roll when a young woman in an old-fashioned ball gown falls from the clouds smack in front of his biplane. As fearless as she is peculiar, Jael immediately proves she's game for just about anything, including wing-walking in his struggling airshow. In return for her help, she demands a ride back home . . . to the sky.

Hitch thinks she's nuts--until he steers his plane into the midst of a bizarre storm and nearly crashes into a strange airship like none he's ever run afoul of, an airship with the power to control the weather. Caught between a corrupt sheriff and dangerous new enemies from above, Hitch must take his last chance to gain forgiveness from his estranged family, deliver Jael safely home before she flies off with his freewheeling heart, and save his Nebraska hometown from storm-wielding sky pirates."

- The book bills itself as "diesel-punk." There might be one diesel engine in the whole story, but it's never referred to as such. It'd be nicer to have some more diesel based tech in the world. It's more like historical fiction with a few very mild fantasy elements thrown in. Not that that's a bad thing, I like historical fiction...

- I figured out who Walter was at about the 17% mark. This isn't really a bad thing, but it's treated like this big mystery that none of the characters have a clue about... yeah, if you can add, you'll be at least a little suspicious...

- Everything... The hero is great. Hitch has a lot of heroic qualities, but he's been running away from problems all his life.

- The book really captures the adventure and excitement of the barnstorming pilot days. Makes me want to fire up the flight simulator.


Overall, four stars, easy. Great fun, (almost) couldn't put it down (wife wanted something at one point. I said, "But there's a girl hanging from an airplane!" She let me keep reading...) I really hope there's a sequel.