Return of The One True Keyboard! 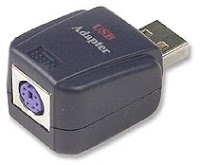 Why? Isn't that technology from the 80's? Why would I need to use a P/S2 device these days?

To use my IBM Model M keyboard, of course!

If you've never used one of these, you're missing out. (unless you can't touch-type, but that's another problem...)

There are all kinds of sites that rave about the benefits of the Model M, so I won't go into too much detail. To summarize, the tactile feedback is great, you know for sure if you've hit a key or not. Also, the thing is built like a tank--if mine were a human, it'd be old enough to drink.
I got mine from MSU salvage. That's right, they were just going to throw it out. I think I paid about five or ten dollars for it. It was filthy, and the right ALT key didn't work. After a few keyboard wipes, it looks brand-new. I didn't use the ALT key anyway, so that didn't bother me. A few years later I got a replacement spring... that's right, the only reason it wasn't working is that someone lost the spring under the key. I put it back in, and it's as good as new. 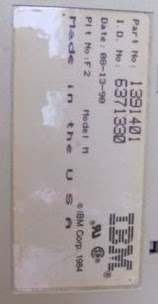 Mostly, though, I love it for how it types. Your fingers don't get as tired, you can feel when a key is pressed... it's great. The junky USB keyboard I've been using in the meantime feels mushy. Sometimes a key will press when I didn't think I'd hit it that hard, other times it'd double-key when I pressed too hard... yuck. In its defense, it was very cheap, but the Model M is two to three times as old, and has none of these problems. Many people have reported increased typing speeds on the Model M, and I believe it.

Also, no Windows keys! I can't stand them. I'm always hitting them on accident.

More info on the IBM Model M, as well as a few old ones to buy: http://www.clickykeyboards.com/
Posted by Unknown at 9:28 AM