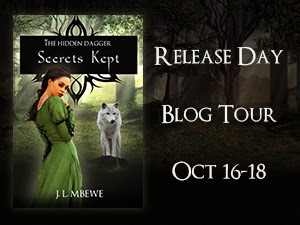 A friend of mine has a new fantasy book that just came out on the 15th.
It's called Secrets Kept.

"With a curse, she will build an army.
With the dagger, she will undo the last sacrifice.
But first the sorceress must find the secret keeper.
Torn from her homeland and thrust into a betrothal against her wishes, Ayianna learns her family has a deadly secret that now has her on the run. She joins forces with Kael, an embittered half-elf, and Saeed, an elderly High Guardian, to seek answers to her father’s death, the destruction of Dagmar, and the plains people’s bizarre behavior.
Ayianna discovers there is more at stake here than just her mother’s disappearance and her familial duty to her betrothed. The sorceress has cursed the plains people, and it is a race against time to release them before the sorceress resurrects an ancient evil."

Find it at Amazon and Goodsreads.

*Excerpt*
“The curse of the forest?” Vian stared at the trees, and then the river. “But what about breakfast?”
“No time, carry what you can; leave the rest behind,” Kael said. He kicked dirt over the smoldering embers in the small fire pit.
“Preposterous! I can’t leave my robes and blankets!”  The prince lugged an armful of blankets and clothes onto his shoulders, a sleeve of a robe trailing behind him. “Any chance of someone carrying this for me?”
Kael raised his eyebrows. “What do you think?”
“Couldn’t hurt to ask.” Vian forced a fragile smile.
Kael turned away and buckled the sword belt around his waist. He, then pulled out a small orb from his knapsack and whispered, “Yetakoith taheza.” A light sprang to life within the orb like the morning sun pushing through a darkened horizon.
Desmond jumped back. “What sorcery of the Abyss do you bring down upon us?”
Kael shook his head and stepped away, scanning the ground for remnants of the Naajiso trail. What exactly was he looking for?
“Well?”
“If a small charm of the guardians bothers you, then perhaps you should go back.”
Desmond’s lip curled. “Caution isn’t wasted when one can’t distinguish friend from foe.”
“Perhaps you should figure that out first. We don’t have time for mistrust.”
“Don’t worry, Desmond, I appreciate your caution, even if it is a little misguided,” Vian said with a smile. He staggered under the awkward bundle of blankets and robes that he had managed to cram into large lumpy mess.
Kael rolled his eyes and turned away. A few yards away a sliver of polished black stone glinted beneath a layer of dead leaves. Above it, large twisted trees stood like sentries guarding the entrance to the Forest of Inganno. Grey mist hovered over the ground and clung to their crumpled bark.
It breathed of dark magic and death.
Kael looked over his shoulder. Vian stood behind him and stared up at the trees.
Vian sucked in his breath. “Let’s hope we don’t return horrified and stricken with disease.”
“Or never return at all,” Desmond said. He clasped the prince on the shoulder and glared at Kael. “People avoid this forest for a reason. I should know—this is my uncle’s land.”
“It belongs to no man.” Kael eyed the formidable trees. An ancient force lingered at the edges of the forest like the foul stench of a beast. The unseen vapors tugged at him, threatening, demanding. But what could a forest demand of him? He tightened his hand on the hilt of his sword, and words from the sacred text flitted through his mind. But to whom I belong, he abides in me. For he is the true one, and truth is stronger than he who abides in the world of lies.
Too bad he and Osaryn weren’t on speaking terms. If he even belonged to the elven god anymore. An overwhelming sense of hopelessness drowned his grief. No, he could not think like that. Not when he stood on the threshold of his demise. Kael took a deep breath. To enter the forest meant death, yet Kael was about to lead a spoiled prince, an arrogant merchant and a naïve girl through its dangers. And what was he?
“…a few days, nothing more…” Saeed had said. “Stay on the trail and no harm will come to you.”
Kael held up the orb and entered the forest.

For more information on the book, interviews with the author... and did I mention prizes?, check out the other stops on the blog tour!

Email ThisBlogThis!Share to TwitterShare to FacebookShare to Pinterest
Labels: Book Reviews, eBooks, Other