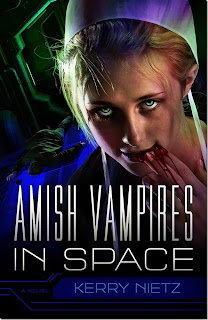 Jebediah has a secret that will change his world forever and send his people into space.
The Amish world of Alabaster calls upon an ancient promise to escape destruction. Then end up on a cargo ship bound for the stars.
But they are not the only cargo on board. Some of it is alive…or used to be.
Now, with vampires taking over and closing in on the Amish refugees, these simple believers must decide whether their faith depends upon their honored traditions or something even older.

Amish Vampires in Space. I'll just let that title sink in for a moment...

What nutjob would write a book with this title.... and and even bigger question, how could it possibly get published?

Obviously, it all started as a joke. From the forward to the book:

"It was March 2010 and Amish fiction was all the rage in Christian publishing. Entire novelists’ careers were being made in the “bonnet and buggy” genre. Publishers were telling writers, “If you don’t write Amish, don’t bother contacting us.” What had seemed like a fad a few years ago was looking more and more like a subgenre that was here to stay. And it just cried out for a roasting. I mean, I’m quite sure that many, maybe most, Amish folks are delightful, genuine, and dear believers in Christ. But the way Christian fiction readers were flocking to novel about them, and the way Christian writers and publishers were all but worshipping them, was perhaps a bit overblown.
[...]
Whatever the cause, Amish fiction was everywhere, and it sort of frustrated those of us who didn’t love it. So I came up with the comical title Amish Vampires in Space to poke fun at it all.
[...]
Then I showed the cover around to a bunch of my publishing friends, just for yuks. Fast-forward to August 2012. One of my Marcher Lord Press authors, Kerry Nietz, who had already written four novels for me at that point, contacted me and said that he’d come up with a plot idea for Amish Vampires in Space and did he have my permission to write that book. I reserved the right to not publish it until I could read it, but I told him to go for it. To my surprise, Kerry played the idea straight. Despite the humor implicit in the title (see, People Who Might Be Mad at Us, we intended this to be funny), he created a fantastic book with an altogether believable scenario in which Amish people might find themselves in space, confronted with vampires.
[...]
"

And yes, despite the B-Movie title, the book is a straighforward (well, as much as possible...) sci-fi work. I really did expect more of a Douglas Adams or Piers Anthony type work from the title, but, somehow, Mister Nietz has come up with a plausible way to get Amish and Vampires into a sci-fi novel in a way that makes sense.

Now, I must confess to not reading many Amish books. I think I've read two that were recommend to me, both by big-name authors (well, big name among those that write Amish books...) Both portrayed the Amish as fundamentalist, evangelical Christians, who just happened to live in a different society and ride horses. I've gathered, from talking to Amish Book fans, that just about all of them are that way. Which really does an injustice to the Amish. Kerry Nietz doesn't do that here. Somehow, despite quite possibly the most bizarre setting you've ever heard of, he portrays a more accurate refection of both Christianity and the Amish.

The books plotting is a combination of action/adventure and thriller, but it doesn't get overly gruesome. I have a fairly weak stomach, and I wasn't grossed out at all reading this (it was one of my worries, a lot of vampire books are pure horror).
(If you're curious, the 'how can vampires exist' question is handled in a straightforward way that other sci-fi books have already done. What makes it unique here is adding Amish, of all things, into the mix.)

The sci-fi element was great. The world building was spot on. A lot of thought obviously went into how everything works, and how such disparate groups could all exist in the same story universe.

There was a lot of character driven interaction here too. Conflict between the different groups, and spiritual and moral dilemmas for Amish and Englisher characters over how to relate to one another, and how to deal with the vampire threat.

The one thing I felt was missing is the humor. With a title like that, I, personally, would have preferred campy humor. Puns, jokes, ridiculousness just for the fun of it, that sort of thing. Amish Vampires in Space has none of those.
In spite of that, the book is still funny. The humor, in this case, is supplied solely by the reader. There were moments when I was caught up in the tale, stopped, blinked a few times and thought "This is crazy, and yet it works..."

As long as you accept some standard sci-fi conventions, there aren't any plot holes that make the tale not believable. And for that, I think Kerry Nietz has firmly established himself as a mad genius.

I debated giving this four stars, for the lack of slapstick humor and such, but on the other hand, with a title like "Amish Vampires in Space", it's MUCH harder to do a straight sci-fi tale, and still make it good.