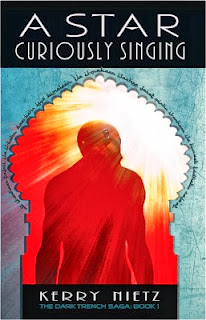 Sandfly is a debugger. He is property. Bought and paid for by his master. But now he’s been called into Earth orbit. Apparently the masters have a new spacecraft and the only robot on board went mad and tore itself limb from limb.

The setting of the world is a little depressing.

The Good:
Despite being depressing, the book is fairly humorous, but in a subdued manner. The way the tech works, and how different characters interact with it is really engaging.
The plot moves right along and hooks you fairly quickly.

If dystopian is one of your favorite genres, and first-person-present doesn't want to make you throw things through the nearest window, you'll probably give it five stars.